Camila Cabello dealt with a scary situation at the El Lay premiere of her new Cinderella movie!

After slaying the red carpet in an Oscar De La Renta gown Monday evening, the songstress prepared to go on stage inside The Greek Theatre — but had an viperous moment surpassing getting there.

And, no, we don’t midpoint a Jennifer-Lawrence-tripping-on-her-gown moment: Cami straight up “passed out”! As she joined co-stars Billy Porter, Idina Menzel, and increasingly on the stage, the 24-year-old told the audience:

Shawn Mendes’ girlfriend didn’t share any spare details on the fainting spell, but she added:

“I literally just passed out, and now I’m when and I’m ready to read my notes.”

Fortunately, it was smooth sailing without that. The Don’t Go Yet hitmaker went on to unhook a powerful speech in which she thanked her supporters. She shared:

As fans know, the Amazon Studios mucosa was a bit of a passion project for Camila, who told Variety in 2019 that the movie “was one of those things that felt like God handcrafted it for me and was, like, ‘Here you go.’” She added:

“I just couldn’t say no. It’s honestly a dream for me. And moreover a little bit terrifying… For my first vicarial classes, I was, like, ‘What the f**k am I doing here? This is so scary.’ But my vicarial coach, Anthony Meindl, taught me it’s all well-nigh the act of surrender and ‘the art of listening,’ as opposed to stuff in your head. That’s the only technique he has for acting, as simple as it is.”

In March 2020, Porter, who plays the fairy godmother, explained that the mucosa is a take on the popular fairy-tale for a new generation. He shared:

“It’s not well-nigh women needing a man for validation. It’s well-nigh women empowering themselves, and that’s a really unconfined message to be sending out into the world.”

We may never know what caused Camila’s fainting spell, but it’s unscratched to say she killed it in her first major vicarial role!

Take a squint at the trailer (below) and stream the mucosa on Amazon Prime Video starting September 3. 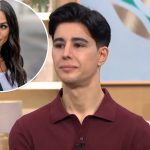 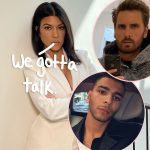