Zoe Saldana dazzled at the Venice Mucosa Festival as she smooched her husband, Marco Perego Saldana, in a rare outing for the couple.

Zoe Saldana, 43, and Marco Perego Saldana, 42, put their love on full walkout at the Venice International Mucosa Festival on Thursday, Sept. 2. The Guardians of the Galaxy actress was joined by her Italian versifier husband for the star-studded premiere of her upcoming mucosa Hand of God, and the couple looked so in love while they shared a super sweet kiss on the red carpet. Zoe and Marco’s romantic (and very public) smooch was a bit unexpected, given the couple rarely steps out together for these major Hollywood events. But still, a welcome surprise nonetheless!

Zoe and Marco’s kiss wasn’t the only thing that stood out well-nigh their visitation in Italy. The two were each dressed to the nines to gloat Zoe’s upcoming Italian drama flick, and they showed off their mythological looks on the carpet for all to see. Zoe looked stunning in a red Dolce & Gabbana sequined dress, which she accessorized with woebegone shoes. Meanwhile, her beau looked dapper in a woebegone tuxedo that included a stylish bowtie, white sawed-off up and woebegone vest. He moreover wore woebegone boots and ruby-red earring that, very fittingly, matched his wife’s remarkable attire. Talk well-nigh a well-dressed couple!

Zoe and Marco have been married since June 2013, and they share three children: twin boys Cy Aridio and Bowie Ezio, 6, and son Zen Anton Hilario, 4. After the couple wed, Marco decided to take his wife’s last name, despite Zoe attempting to convince him otherwise. “I tried to talk him out of it,” Zoe said to Instyle in 2015 of her attempts to stop Marco from taking her surname. “I told him, ‘if you use my name, you’re going to be emasculated by your polity of artists, by your Latin polity of men, by the world.’ But Marco looks up at me and says, ‘Ah, Zoe, I don’t requite a sheet,’ ” she widow to the publication.

Now, eight years of marriage and three sons later, Zoe and Marco truly seem to be increasingly in love than ever! 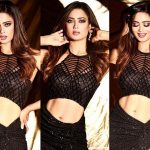